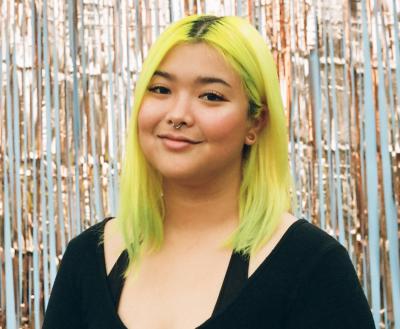 Anindya Kartika-Orr, who goes by “Nindy” is a singer-songwriter based in Los Angeles,
California. Originally from Jakarta, Indonesia, she moved to LA in 2011 to pursue her dreams of
a career in music. A multi-instrumentalist, Nindy's main instruments are vocals and piano; she
specializes in classical piano and is a multifaceted vocalist with an experienced skillset in
various styles such as rock, jazz, pop, and choral music. She served as a Student Director in the
Musicians Institute vocal ensemble and won two certificates for Outstanding Musicianship as a
Soloist from the Fullerton College Jazz Festival in 2013. Nindy began writing songs at a young
age and has been continually developing her craft through the years. Her songwriting is strongly
supported by her innate sense of arrangement and her unbounded sense of creativity.

Anindya's solo artist passion project is Dyasono. The Dyasono project was officially
launched in 2015 with the release of her first single “Hello, You”, her most recent single “Walk
Away” was released on May 25th 2020. Currently, Dyasono is being reinvented with Nindy's
most progressive creative ideas and personal experiences manifested as songs; making it her
most ambitious project thus far. This project is a culmination of Nindy's experience of being the
front-woman in 2 original bands. At 17 years old, Nindy started an alternative-rock band called
BeforeAfters which was based in Kuala Lumpur, Malaysia. Nindy composed all the songs for
BeforeAfters and the band released a 5 track self-titled EP in 2011 and a 6 track EP called
"Radiance" the following year. After moving to Los Angeles, Nindy joined a rock band called
Mary's Mischief where she co-wrote the band's original songs. Nindy gained most of her
performance experience with Mary's Mischief. The band performed at many well-known local
venues in LA such as The Mint, El Cid, The Federal, Boardners, Loaded, and Molly Malone's.
The biggest event they played was the Mountain Dew "DewTour" (a skateboarding festival) in
June 2017 located in Long Beach, California.

Alongside her vast experience in performance and songwriting, Nindy also has audio
engineering skills and is knowledgeable of the music industry. A graduate of Musicians
Institute Hollywood and Music Industry Studies at California State University Northridge,
Anindya has invested her time into learning about every aspect of the music industry. Nindy's
closest mentor is Genevieve Artadi, who is one half of an upcoming group in the jazz world
called Knower. Knower has worked with esteemed artists and musicians such as Quincy Jones,
Snarky Puppy, and Thundercat. Working with Genevieve, Nindy received priceless advice on
songwriting and has garnered experience in producing music videos as well as live shows.
Anindya is utterly determined to be more than just a performer. Her ultimate goal for the future
is to become an established and educated songwriter and musician that will thrive in the
industry.